HomeNewsDe Blasio UNLOADS on Cuomo, backs Dem who says he was threatened: ‘The bullying is nothing new!’
News

De Blasio UNLOADS on Cuomo, backs Dem who says he was threatened: ‘The bullying is nothing new!’ 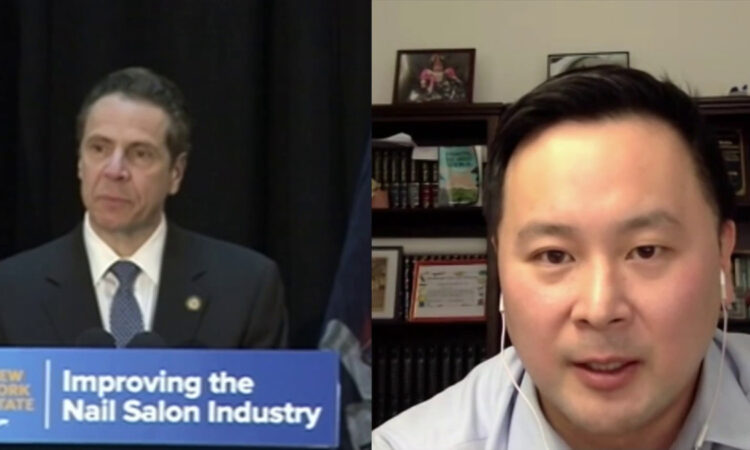 As the FBI and the U.S. Attorney’s office in Brooklyn are probing the state of New York’s handling of data related to coronavirus deaths in nursing homes, things are looking worse for Governor Andrew Cuomo.

During an interview on MSNBC, Democrat New York Assemblyman Ron Kim says he was threatened in a phone call from Gov. Cuomo due to his criticism of the Governor’s handling of nursing home deaths.

“Gov. Cuomo called me directly on Thursday to threaten my career if I did not cover up for Melissa [DeRosa] and what she said. He tried to pressure me to issue a statement, and it was a very traumatizing experience,” Kim said. “He spent 10 minutes berating me, yelling at me, threatening me and my career, my livelihood.”

Below is a statement from Rich Azzopardi, Senior Advisor to Governor Cuomo:

“Mr. Kim is lying about his conversation with Governor Cuomo Thursday night. I know because I was one of three other people in the room when the phone call occurred. At no time did anyone threaten to ‘destroy’ anyone with their ‘wrath’ nor engage in a ‘coverup.’ That’s beyond the pale and is unfortunately part of a years-long pattern of lies by Mr. Kim against this administration. We did ask for Mr. Kim to do the honorable thing and put out a truthful statement after he told the Governor he was misquoted in a news article, which he said he tried to correct but the reporter refused. Kim said he would correct the story and then broke his word. No surprise. Instead over the last six days he has baselessly accused this administration of pay to play and obstruction of justice. These continued falsehoods are why the Governor chose to speak out today. We will not allow an unscrupulous politician to deceive New Yorkers or distort the truth. Mr. Kim’s current statements do not even align with the comments he made at the meeting (see below). He is without credibility as his own words demonstrate. Lies have caused families grieving from COVID enough pain. We understand it is our obligation to correct misstatements so families understand the true facts during COVID.

“Mr. Kim and the Governor’s office have had a long, hostile relationship. The animosity initiated when Mr. Kim supported a bill protecting nail salon workers only to do a 180 degree reversal after he received significant funding from the owners of the nail salons. He was criticized by good government groups at the time and the Governor’s office called his actions into question. Mr. Kim continues to receive funding from nail salon owners and continues his attempts to remove the protections for nail salon workers. It is an ongoing unethical situation with Kim receiving funding from owners attempting to stop our efforts to protect victimized nail salon workers. We believe Kim’s continuing pay-to-play actions are at a minimum unethical and when and if investigated will prove to be illegal. To be clear, neither the Governor nor his aides threatened any legislators and in fact, the meeting in questions was considered positive by those who attended. It is the distortions of the meeting by those with different agendas that we object to.

“On the merits Mr. Kim and the NY Post and republicans argue that the state’s March 25th order on nursing homes was bad policy. What they fail to mention is the state was following federal policy and if the Post and republicans want to play a political blame game, they should blame Donald Trump and they should have blamed Donald Trump’s since last March 25th when they promulgated the guidance. We will stick to the facts.

“Dr. Zucker does not believe the March 25th order was wrong. Even with the advantage of 20/20 hindsight, health experts do not believe it was wrong. We believe it saved lives and the facts demonstrate that. If, with the advantage of hindsight, we concluded the March 25th order was wrong, Commissioner Howard Zucker would admit that and we would take action against the federal government for malpractice in issuing flawed guidance. COVID was already in the nursing homes by the time March 25th arrived. That is a proven fact. Hospital beds were critical. And that is a proven fact. People needed hospital beds with ventilators and critical care nursing staff to save their lives. We provided that. Unlike other states and countries our hospital system was not overwhelmed and we went from the highest infect rate to the lowest and saved lives. That is the irrefutable truth.

NYC Mayor Bill De Blasio responded to the allegations saying, “The bullying [by Cuomo] is nothing new.”

The post De Blasio UNLOADS on Cuomo, backs Dem who says he was threatened: ‘The bullying is nothing new!’ appeared first on Breaking911.

share on Facebookshare on Twitter
Sen. Ted Cruz wanted to “be a good dad” when he flew to Cancún as Texans freeze
BIDEN ADMIN. READY TO HOLD TALKS WITH IRAN