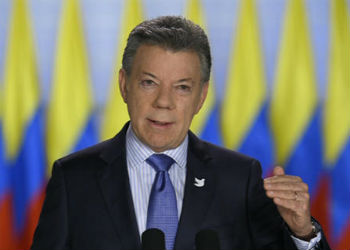 The government of Colombia has issued seemingly contradictory statements regarding the amount of coca it aims to forcibly eradicate next year, while evidence from the eradication campaign this year has raised questions about the feasibility of this strategy.

President Juan Manuel Santos said on December 14 that the government plans to forcibly eradicate 65,000 hectares of coca in 2018, a more than 20 percent increase from the 2017 goal.

The announcement came shortly after Colombian Defense Minister Luis Carlos Villegas said that authorities had surpassed their goal of forcibly eradicating 50,000 hectares of coca crops this year, according to a government press release.

The apparent contradiction between the statements by Santos and Villegas reflects the Colombian government’s struggle to balance forcible eradication with voluntary crop substitution programs.

However, an October report from the Ideas for Peace Foundation (Fundación Ideas Para la Paz – FIP) found that the government had achieved just 5 percent of its coca crop substitution goal through September 30, projecting that only 20 percent of that goal would be achieved by year’s end.

Moreover, Colombian military sources told InSight Crime that the forced eradication figures from this year may have been inflated to make the efforts seem more successful than they actually were.

The Colombian government’s focus on praising their forced eradication successes likely stems from increased pressure by the United States, which threatened to designate the country not compliant in anti-drug efforts in September of this year amid record cocaine production.

Adam Isacson, a senior associate at the Washington Office on Latin America (WOLA), told InSight Crime that the focus on forced eradication “is really owed to US pressure.”

“Colombia feels the need to keep [the] Americans happy,” Isacson said. “It absolutely has a lot to do with the pressure coming from the United States, which was strong in the Obama administration as well.”

The emphasis on forced eradication has antagonized communities that depend on drug production for their livelihood. In October, for example, an incident involving farmers protesting against the government’s forced eradication of coca crops in the southwest port city of Tumaco resulted in the deaths of at least nine civilians.

Although forcible eradication campaigns have had limited long-term success in containing drug crop cultivation, they are easier to implement than voluntary substitution programs, which face substantial political and logistical obstacles.

Indeed, Colombia President Juan Manuel Santos acknowledged in his December 14 address that the government had failed to meet all of its goals, explaining that the coca crop substitution process simply “does not happen overnight,” though progress is being made.