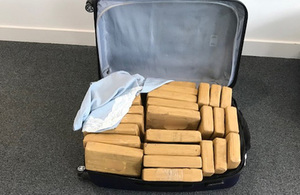 It is believed to be one of the largest seizures of its kind in the UK.

The weight of the drugs was estimated to be 500 kilos – a full forensic analysis will now take place.

Working with law enforcement colleagues like the National Crime Agency (NCA) we are determined to prevent drug trafficking and bring those responsible to justice.

This was a significant find made possible by the vigilance of dedicated Border Force officers. They have prevented a substantial quantity of drugs from ending up on our streets and causing untold misery and damage to our communities.

After meeting the flight and questioning those on board, officers became suspicious and searched the aircraft and their luggage. When opened, each case was found to contain between 34 to 37 tape wrapped packages weighing approximately one kilo each. One of these was pierced and a white powder exposed which tested positive for cocaine.

Border Force arrested the 5 passengers on suspicion of importing Class A drugs. They included 2 British men, 2 Spanish men and an Italian man. The investigation was passed to the NCA. Hampshire Constabulary also helped by guarding the men arrested and moving the drugs to a secure location.

Three addresses in the Bournemouth area have been searched by the NCA as part of the investigation, and items including computers and phones were seized.

The crew of the plane were also questioned and were released without charge.

This is a major seizure of cocaine, one of the largest flown into the UK by plane in many years, and this seizure by Border Force represents a major blow to organised crime.

We estimate that once cut and sold on the streets in the UK it would have had a potential value in excess of £50 million.

Our investigations into this attempted importation are continuing.