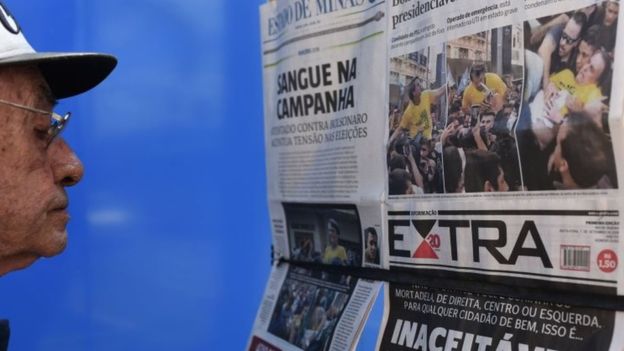 Doctors at the hospital where Jair Bolsonaro is being treated say the far-right Brazilian presidential candidate’s health has “improved markedly” since he was stabbed at a campaign rally on Thursday.

They said he is spending more time out of bed but is still fed intravenously.

Mr Bolsonaro, 63, suffered a deep and life-threatening wound to his intestines and lost 40% of his blood.

A 40-year-old man has been arrested in connection with the attack.

Local media reported that the man, Adelio Bispo de Oliveira, told investigators that he was acting “on God’s orders”. Police said they would investigate his mental health. 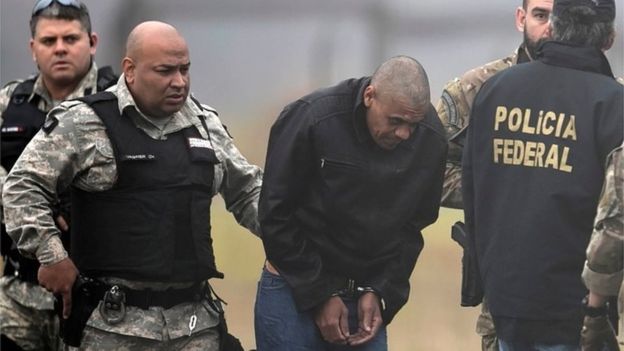 He was grabbed by supporters of Mr Bolsonaro immediately after the attack and manhandled and beaten before being taken into police custody.

Polls suggest Mr Bolsonaro is the favourite to win the first round of Brazil’s presidential elections on 7 October with an estimated 22% of the vote, if former President Luiz Inácio Lula da Silva cannot run.

But while opinion polls put Mr Bolsonaro ahead if Lula is taking out of the equation, they also suggest that the far-right candidate would not fare that well were the elections to go into a second round, which happens when no candidate gains more than 50% of the vote.

Mr Bolsonaro of the Social Liberal Party (PSL) is a divisive politician whom some analysts have compared to US President Donald Trump.

His homophobic and misogynist comments have caused outrage among many Brazilians but he enjoys the backing of millions of evangelical Christians who praise his anti-abortion stance.

Mr Bolsonaro remains in intensive care and could take two months to recover, meaning he will not be able to return to the campaign trail before the election.

On Sunday, he missed a TV debate between the presidential hopefuls in which the candidates condemned the attack on Mr Bolsonaro.

Left-wing candidate Ciro Gomes called it an “act from somebody who is not of sound mind” and former finance minister Henrique Meirelles who is running for the governing Brazilian Democratic Movement said it was “an absolutely reprehensible attack”.

While Geraldo Alckmin, the candidate for the centrist Brazilian Social Democracy Party, also expressed his solidarity with Mr Bolsonaro in the wake of the attack, he said during the debate that it was time to focus “on the issues that matter to the people of Brazil”.