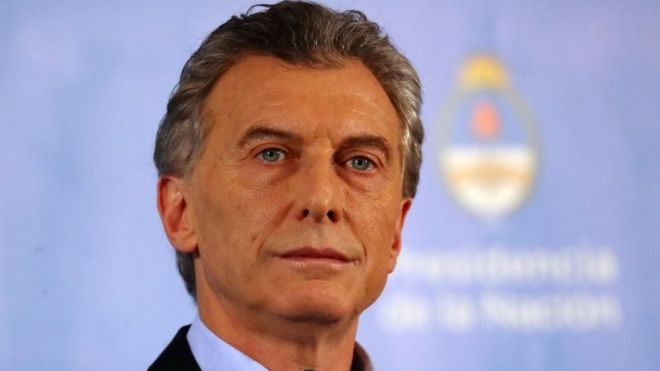 Argentina’s government has unexpectedly asked for the early release of a $50bn (£37.2bn) loan from the IMF amid a growing economic crisis.

President Mauricio Macri said the move was designed to restore confidence in the Argentine economy.

The Argentine peso has lost more than 40% of its value against the US dollar this year and inflation is rampant.

The IMF confirmed on Wednesday it was looking to strengthen the arrangement and changing its phasing.

“I stressed my support for Argentina’s policy efforts and our readiness to assist the government in developing its revised policy plans,” Christine Lagarde, the International Monetary Fund’s managing director, said in a statement.

Investors are concerned Argentina may not be able repay its heavy government borrowing and could default.

Correspondents say the decision to speed up the IMF bailout smacks of growing desperation.

When the terms of the loan were agreed in May, President Macri said he expected the economy to recover and did not plan to use the money.

How did we get here?

By Daniel Gallas in Buenos Aires

The world’s highest interest rates and backing from the IMF have failed to reassure investors.

The Argentine peso is still losing value despite all attempts to meet investor concerns.

Other emerging markets such as Turkey and Brazil are also suffering from the devaluation of their currencies this year, but Argentina’s situation is particularly troublesome.

The country has not been able to lower inflation, which is the highest amongst G20 nations. And the government is failing to enact the economic reforms it promised the IMF, most of them aimed at curbing public spending and borrowing.

President Macri was elected on the promise of reviving the economy, but so far it seems little progress has been made.

Everyday life is getting more expensive for Argentines, as the prices of many goods and services still bear a close relation to the US dollar.

And the combination of spiralling inflation and public spending cuts means wages are not keeping pace with prices, making most people poorer.

What did the president say?

“Over the last week we have seen new expressions of lack of confidence in the markets, specifically over our financing capacity in 2019,” Mr Macri said in a televised address.

“We have agreed with the International Monetary Fund to advance all the necessary funds to guarantee compliance with the financial programme next year.

“This decision aims to eliminate any uncertainty.”

He added that further measures to rein in government borrowing would accompany the move.

What do his opponents say?

Mr Macri’s decision to ask the IMF for help in May was criticised by many within his country.

The IMF is widely loathed in Argentina and blamed for the country’s 2001 economic collapse after it pulled the plug and denied financial support.

The country’s opposition blames Mr Macri’s centre-right policies, including the end of capital controls and cuts to social programmes, for the economic crisis.

What is the IMF’s view?

Argentina, which has been plagued by economic problems for years, asked for assistance from the IMF in May after its currency hit an all-time low.

The country committed to tackle its double-digit inflation and cut public spending as part of the deal.

IMF managing director Christine Lagarde said at the time that the plan had been designed by the Argentine government and was “aimed at strengthening the economy for the benefit of all Argentines”.

After speaking to President Macri on Wednesday evening, she said that she had instructed her staff to work with the Argentine authorities to strengthen the agreed arrangement and re-examine the planned phasing.

She also said she was confident the “strong commitment and determination” of the authorities would be instrumental on steering the country through the difficult financial climate.

Have we been here before?

In 2001, Argentina’s government defaulted on its debt and left the banking system largely paralysed.

The effect on Argentines was devastating, with many seeing their prosperity quickly disappear.

Those who experienced it fear a return of government restrictions imposed back then to prevent a run on the banks.

Under the constraints, which lasted for a year, people could not freely withdraw money from their accounts, making life very difficult for ordinary Argentines.